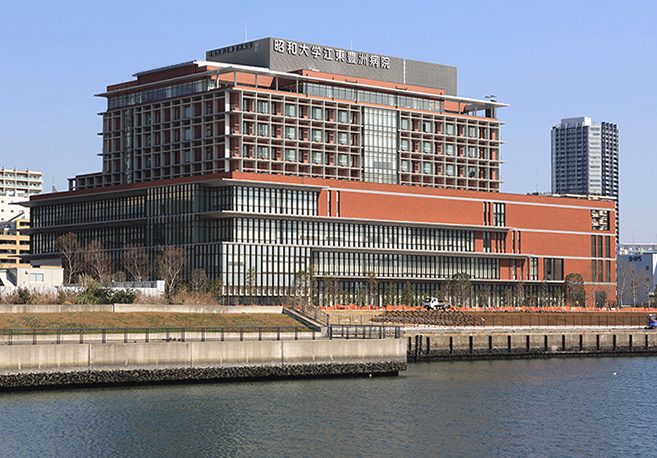 Showa University Koto Toyosu Hospital opened on March 24, 2014. This is a new hospital, the fourth one among the affiliated hospitals of Showa University serving in acute settings. It is located in Toyosu, Koto-ku in Tokyo, collaborating closely with the medical institutions in the eastern metropolitan region and the vicinity as a designated regional medical care support hospital. We are willingly undertaking the task for the secondary emergency medicine in the region.

The hospital philosophy is implementing the following four: 1. heartfelt medicine, 2. safe and secure medicine, 3. medicine in cooperation with the region, and 4. fostering medical practitioners. For realization of it, we have the following objectives aiming at a reliable hospital: 1. achieving a hospital kind to women and children, 2. practicing team medicine consisting of multiple professions, and 3. creating new culture for medicine. Toyosu, where this hospital is located in, is an area still under radical development evolving daily. It is quite noteworthy that young population and families with small children have been rapidly increasing here, and that is why “achieving a hospital kind to women and children” is included as one of the objectives. And another one “practicing team medicine consisting of multiple professions” is for offering better medicine than ever focusing on the benefit for patients with various backgrounds. We are always ready for undertaking tasks for acute diseases including gastrointestinal disorders, cardiovascular disorders (ischemic cardiac disease), cerebral blood vessel disorders (cerebral broke) and obstetrics (perinatal period). For the last one, especially, a hotline number has been prepared for any emergency cases. Also for pediatrics, emergency cases are accepted on a round-the-clock basis, which proves our efforts to achieve “safe and secure medicine,” a part of the hospital philosophy.

One of the biggest characteristics of this hospital is that it is open on Saturdays and Sundays, as well as on national holidays, in the same way as regular weekdays for outpatients’ visits, examinations and scheduled surgeries, which makes it the first university hospital in Japan to offer such services. This is also our effort to achieve one of the objectives “creating new culture for medicine,” serving for patients’ conveniences and contributing as a backup medical institution for other hospitals and clinics in the region. In addition, as a role for a university hospital, “fostering medical practitioners” is a very important mission to pass the responsibilities on to next generations. Therefore, we sometimes ask for patients’ consents to let clinical trainee doctors, students in the Schools of Medicine, Dentistry, Pharmacy and Nursing participate in clinical medicine when necessary.

We are trying to achieve the “two-primary-doctor system” involving a family doctor at a local medical institution in the region. We are determined to make further efforts to aim at becoming the best hospital in the region contributing highly to the community healthcare.

Hospital Philosophy 1. Heartfelt medicine 2. Safe and secure medicine 3. Medicine in cooperation with the region 4. Fostering medical practitioners Basic Objectives for Realization of the Hospital Philosophy We aim to become a hospital kind to women and children. We practice team medicine consisting of multiple professions. The first priority is given to implementing safe and secure medicine. We contribute to the development of the reginal community, cooperating with local medical institutions in the region. We give the medical staff opportunities for skill development and career-building in a systematic framework. We foster medical practitioners who can be engaged in their jobs with pride. We create new culture for medicine.