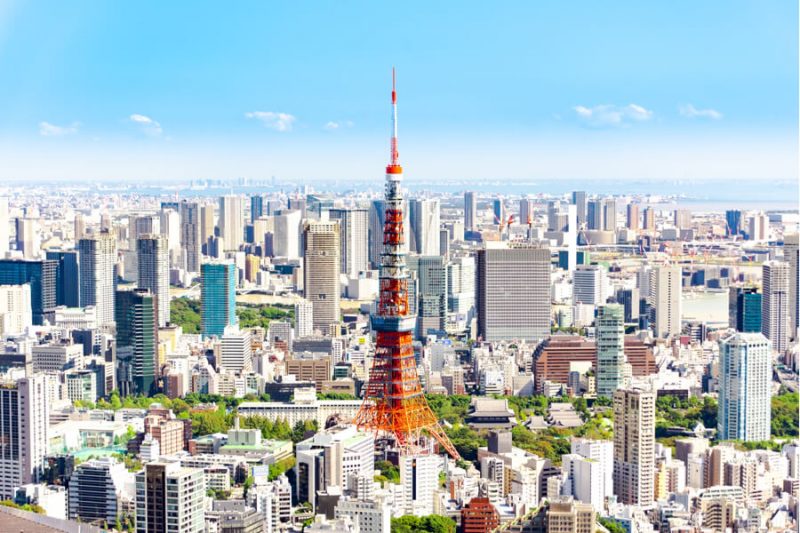 Tokyo is Japan’s capital and the most populous metropolis in the world. The crossing in Shibuya is famous for the number of people crossing there at one time. Tokyo offers a seemingly unlimited choice of shopping, entertainment, culture and dining to its visitors. And at the same time, the city’s history can be appreciated in some particular districts including Asakusa.
City tours are available in English. Please refer to the following for detailed information.
https://www.hatobus.com/v01/en
Attractions are to be found also around the Tokyo Bay area. The Rainbow Bridge leads to the modern waterfront suburban area called Odaiba. 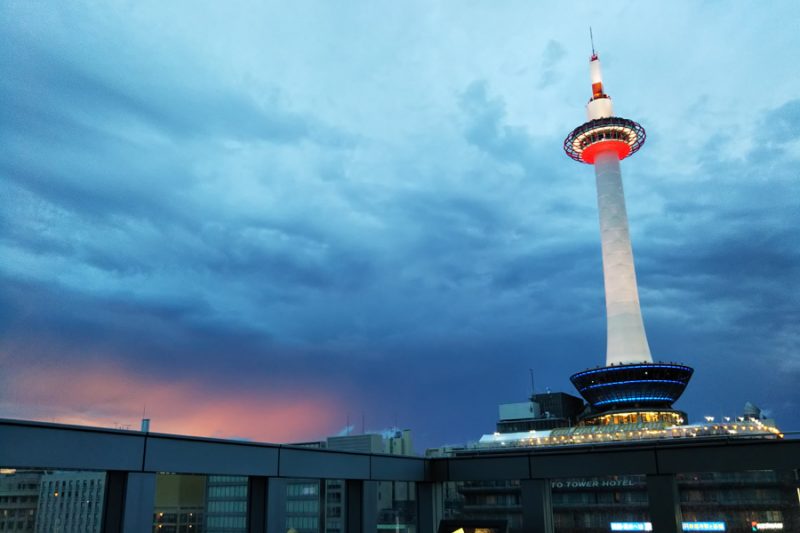 Kyoto had been an old capital of Japan for more than 1,000 years until the Emperor moved to Tokyo in 1868. Kyoto is the cultural center of Japan, and continues to be loved by all Japanese as well as people from abroad. There are lots of beautiful temples, shrines and parks. One of the most breathtaking temples is Kinkaku-ji (it was originally built in the 14th century, but was rebuilt in the 20th century after the fire).
There is a mysterious tunnel of red torii (gates) in a shrine called Fushimi Inari Taisha. This shrine has been popular among foreign tourists since “SAYURI”, a Hollywood movie, was partly shot there.
Kiyomizu-dera (temple) is perhaps the most popular of all the temples in Kyoto.
There are lots of maccha (green tea) sweets at cafés in its neighborhood.
If you want to try authentic tea ceremony in English near Kiyomizu-dera, please check the following for information. http://www.tea-kyoto.com/
You can also contact the following for information about tea ceremony.
TEL：075 525 3238
E-MAIL：camellia.teaceremony@gmail.com
City tours are available in English. Please refer to the following for detailed information and make an appointment in advance.
http://www.kyoto-regulartourbus.com/e/course/index.html 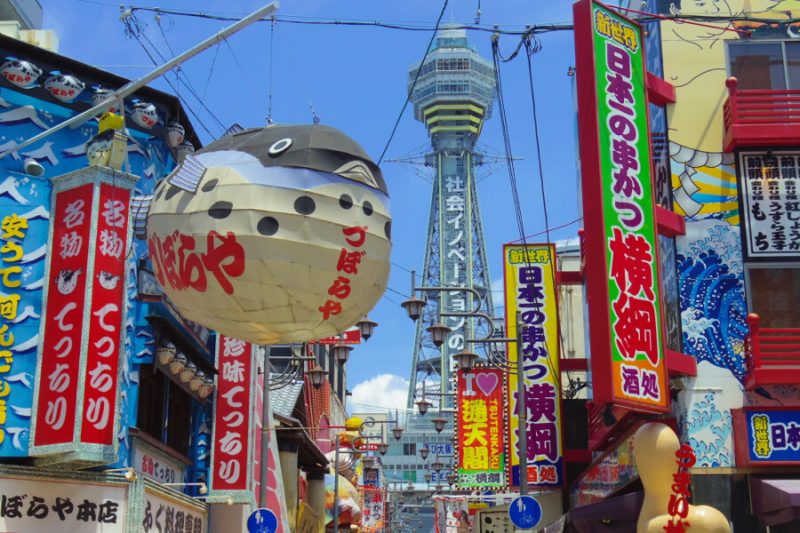 Osaka is the second largest city after Tokyo in Japan. This metropolis has lots of original foods and culture. Dotonbori Street is the No.1 tourist’s destination, as the vast neon signs and restaurants along this street are really overwhelming.
Kani Doraku (a crab restaurant)
The sign of this restaurant is the most well-known on Dotonbori Street. This six-and-a-half-meter crab is just above the front entrance of the crab restaurant Kani Doraku. You can see it move its arms and eyestalks any time. You will have to make a reservation if you would like to dine there.
https://douraku.co.jp/forms/reserve/kansai/amimoto_h/?_ga=1.119041161.1445975719.1491805942
Hours：11:00～23:00
Prices：2,500 yen or more (lunch time)
5,000 yen or more (dinner time)
Kaiyukan (aquarium)
Kaiyukan is one of the most spectacular aquariums in Japan, and is world-renowned for its innovative presentation. Kaiyukan shows the aquatic animals from the Pacific Rim at their most vibrant and dynamic moments of life in their habitats recreated there. 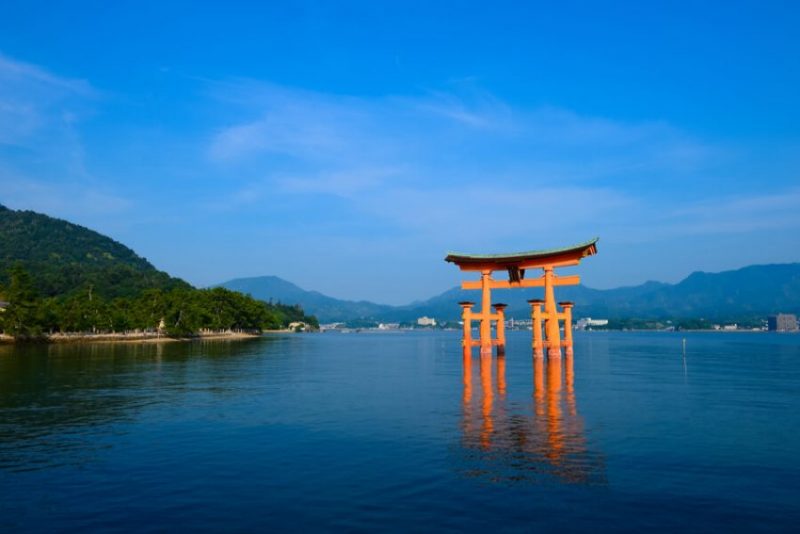 Hiroshima is the capital of Hiroshima Prefecture and the largest city in the Chugoku region in western Japan. Hiroshima is the best known as the first victim of a nuclear weapon in the history, when the United States dropped an atomic bomb on the city at 8:15 a.m. on August 6, 1945, near the end of the World War II. After 70 years, on May 27, 2016, President Obama became the first sitting president to visit Hiroshima.
The Atomic Bomb Dome (Genbaku Dome)
The Atomic Bomb Dome (Genbaku Dome) in Hiroshima is part of the Hiroshima Peace Memorial Park and was designated a UNESCO World Heritage Site in 1996. The Hiroshima Peace Memorial Museum is dedicated to documenting the atomic bombing of Hiroshima in the World War II.
It is located by the Hiroshima Peace Memorial Park, in central Hiroshima.
Hiroshima Peace Memorial Museum
Address：1-2 Nakajima-cho, Naka-ku, Hiroshima-shi
Phone：082-241-4004
Hours：8:30 – 18:30
Fee：Adults: 50 yen
Entrance is limited for 30 minutes before it is closed.
Itsukushima Shrine
Itsukushima Shrine is a Shinto shrine on the island of Miyajima. It is the best known for the torii gate in the bay, as it looks as if it was floating on the water. It is located in Hatsukaichi, Hiroshima Prefecture. The shrine complex is listed as a UNESCO World Heritage Site, and the Japanese government has designated several buildings and possessions of the shrine as National Treasures.
Oysters
Hiroshima accounts for approximately 60-70% of Japan’s oyster production. Oysters are offered at many dining establishments in Miyajima. They are eaten raw with soy sauce or ponzu (soy sauce with flavored vinegar), deep-fried, baked or grilled.
MomijimanjuThese are cakes baked in the shape of maple leaves with a filling of sweet red bean paste. It started in Miyajima in the early 1900s and has been popular among tourists since then. Momijimanju are offered with many different fillings these days, such as maccha, cheese, custard and chocolate.
City tours are available in English. Please check the following for detailed information.
https://www.chugoku-jrbus.co.jp/teikan/meipurupu/en/