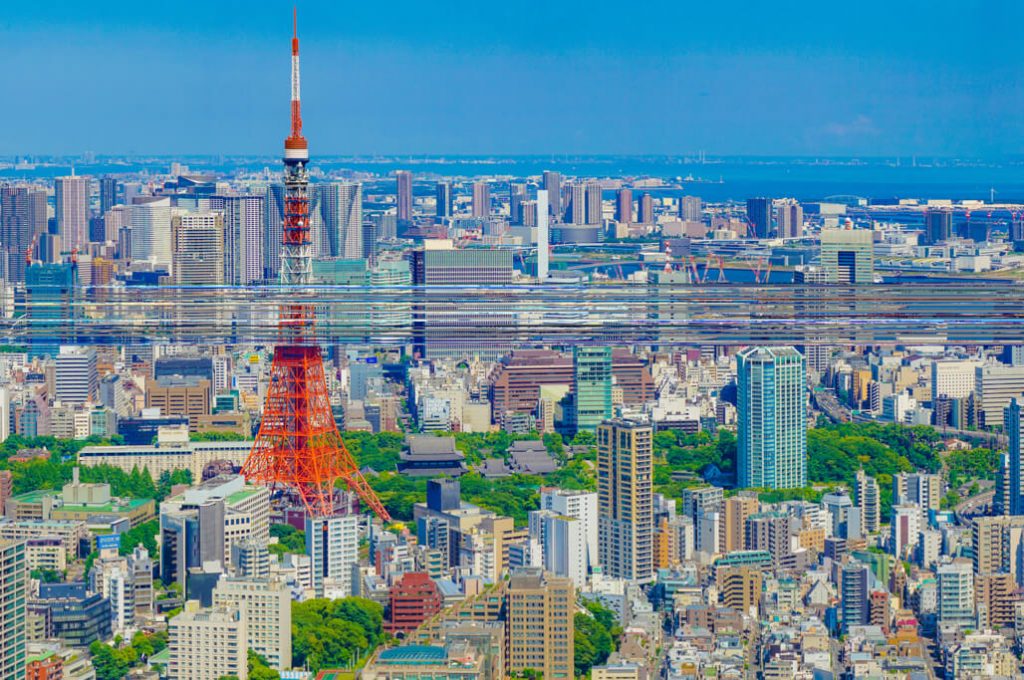 Tokyo is a capital of Japan, the biggest city in the country with the population of 13,880,000. The attractions of Tokyo lie widely spreading from the cutting-edge culture and the latest fashion to the traditional, old-fashioned areas with exotic atmosphere. The various attractive areas include Akihabara known as the “holy place” for animation fans in the world, Shibuya which is popular among young generations, Ginza where international high-end fashion brands have their branch stores, and Asakusa where authentic and traditional Japan still remains. You can get food from all over the world, in addition to Japanese.

There are highly developed public transportation systems in Tokyo, including the JR train lines, the subways and the buses. They make living there as well as visiting quite convenient.

There are two gateways for Tokyo, the Narita International Airport and the Tokyo Haneda International Airport. The Tokyo Haneda is closer to downtown Tokyo than the one in Narita. The access to downtown Tokyo from these airports is as you see down below. All the fares shown there are for Shinjuku, one of the biggest terminals in Tokyo, giving you a rough idea about how much it will take. 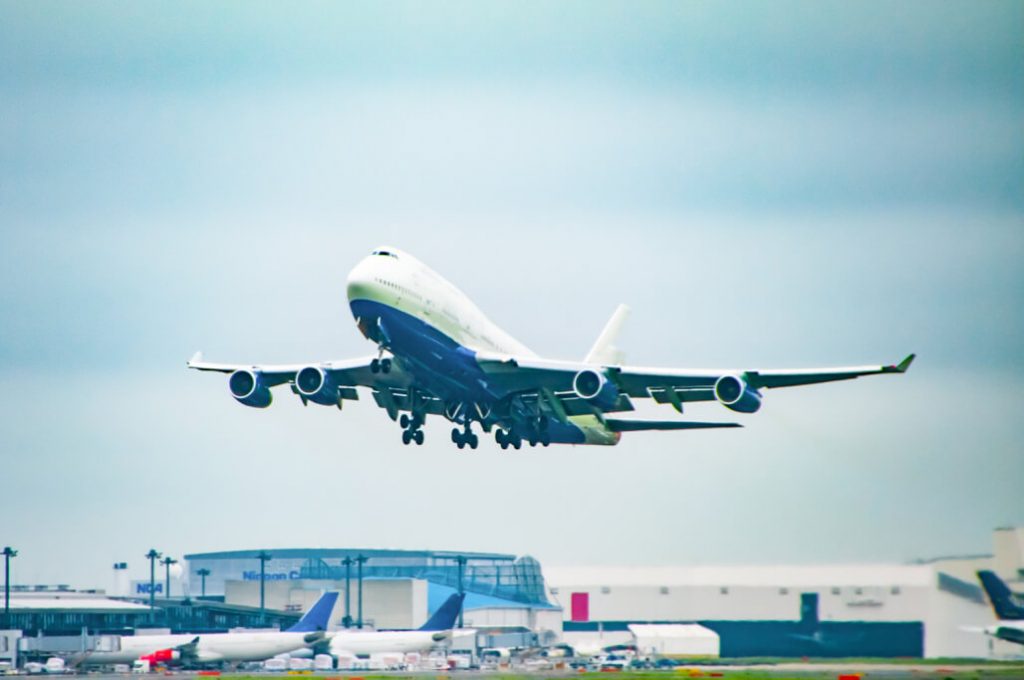 From the Narita International Airport 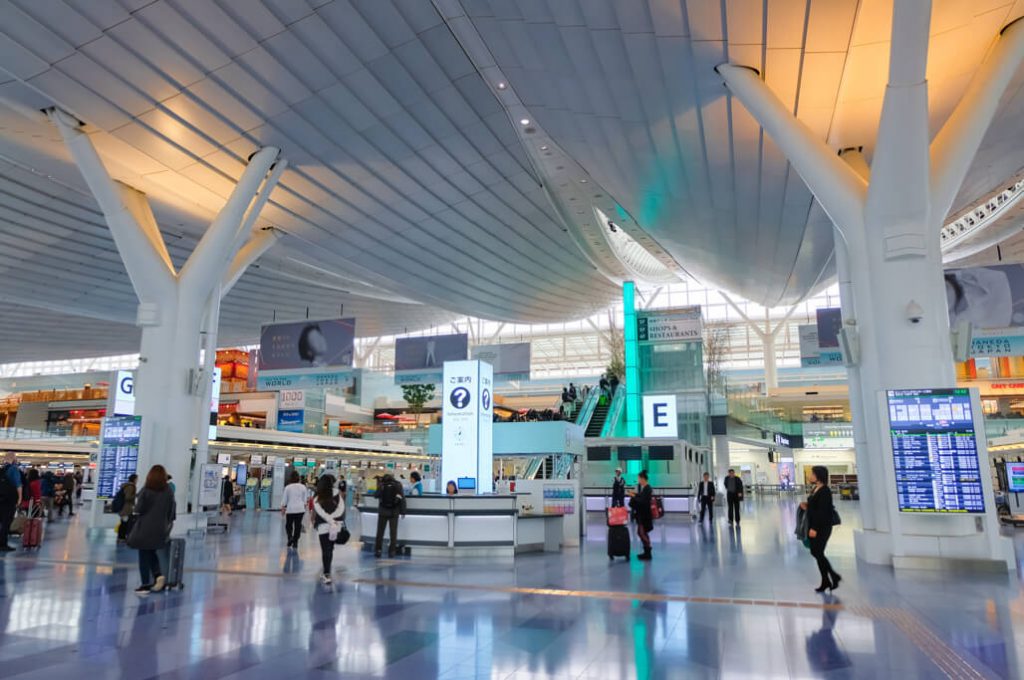 From the Tokyo Haneda International Airport

The most reasonable way to get to Shinjuku is taking the Limited Express or the Express on the Keikyu Line, and change to the JR Yamanote Line at Shinagawa.
Travel Time：About 30 minutes
Fare：601 yen
Boarding Station：Keikyu Haneda Airport International Terminal 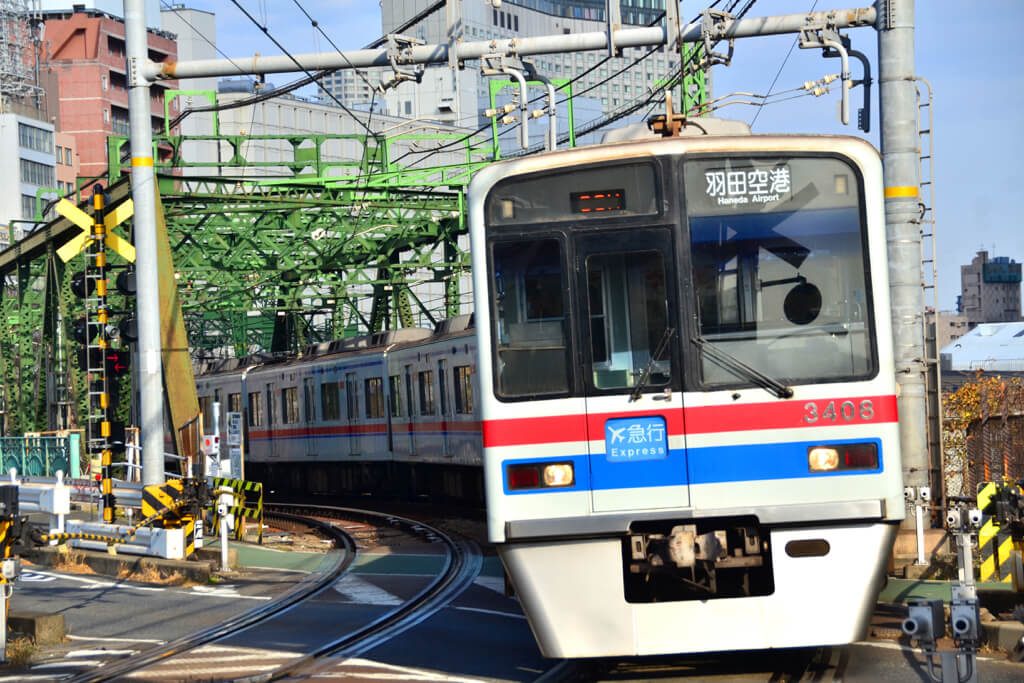 Another reasonable way is taking the Tokyo Monorail and change to the JR Yamanote Line at Hamamatsucho.
Travel Time:37 minutes
Fare：500 yen (Discount Ticket for all the stations along the JR Yamanote Line)
Boarding Station：Tokyo Monorail Haneda Airport International Terminal
The ride on the Limousine Bus is the easiest way without changing trains or buses, but it is often caught in the traffic jam.
Travel Time：About 35-75 minutes (it will depend on the traffic)
Fare：1,230 yen (2,000 yen for late-night & early-morning services)
Boarding Bus Stop：Keikyu Haneda Airport International Terminal Station
The travels are always up to your budget and schedule. Pick the best way and enjoy the stay in Japan. 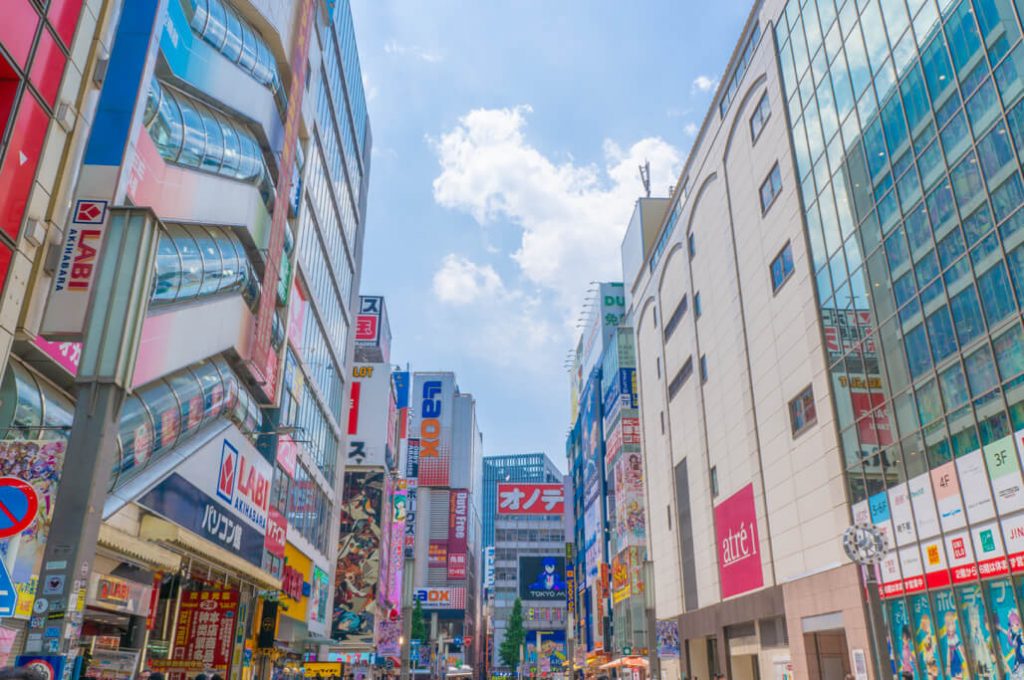 Akihabara is a district in downtown Tokyo quite well-known among manga (animation) and idol fans in the world being recognized as the center of Japanese subculture. Many shops and establishments there are devoted to anime and manga. The Chuo Dori street is closed to car traffic from 13:00 to 18:00 on Sundays.

In Japan, there are little vending machines for toys and souvenirs. They are called “Gacha-Gacha” or “Gacha-Pon”. You might assume these little souvenirs will be merely cheapish junks, but in reality, they are surprisingly good and very unique.
Each item is 200 yen or so. 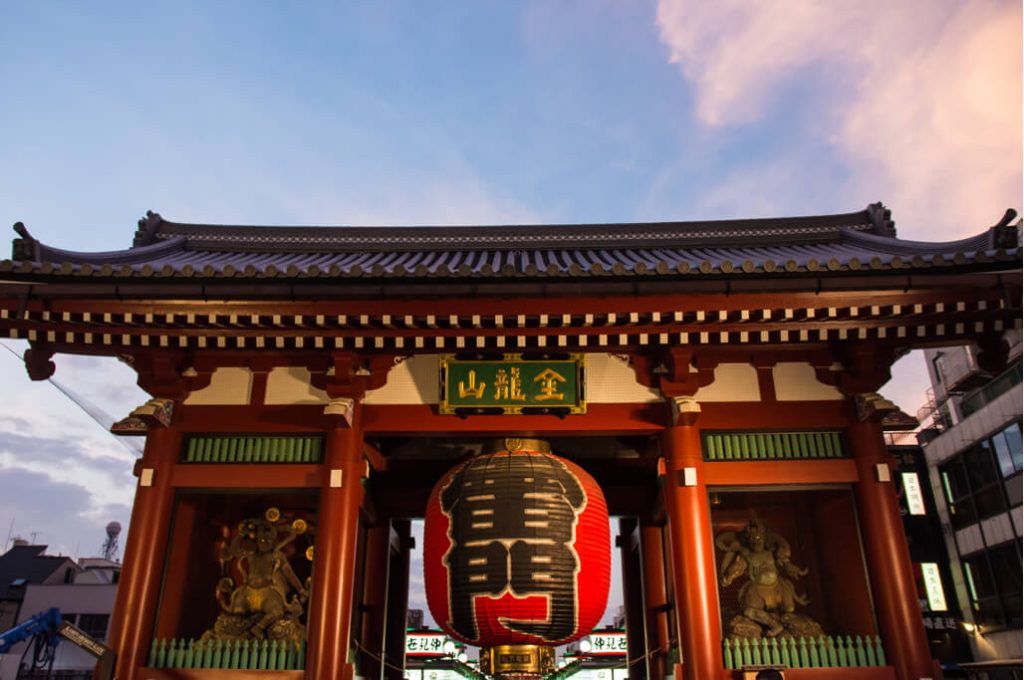 In Asakusa, you will find the Kaminari-mon gate with its huge red lantern, which has made it a famous sightseeing spot. After the gate, you will find yourself walking down the Nakamise Dori street, which is one of the oldest shopping streets in Japan. There are a lot of traditional craft shops and unique souvenir shops along this street leading you to Senso-ji temple. You can feel the atmosphere of old times back in the 16th century. You will be able to visit sightseeing spots in a rickshaw. Walking down a street in this charming old town wearing a Kimono can be a lot of fun. You can rent one at one of the kimono rental shops there.

After visiting Asakusa, just across the Sumida River, there is the one of the most popular tourist spots in Tokyo, the Tokyo Skytree town. There is the world’s tallest broadcast tower (Skytree), a lot of shops and an aquarium. When you go up to the observatory, you will get great bird’s eye view of entire Tokyo. 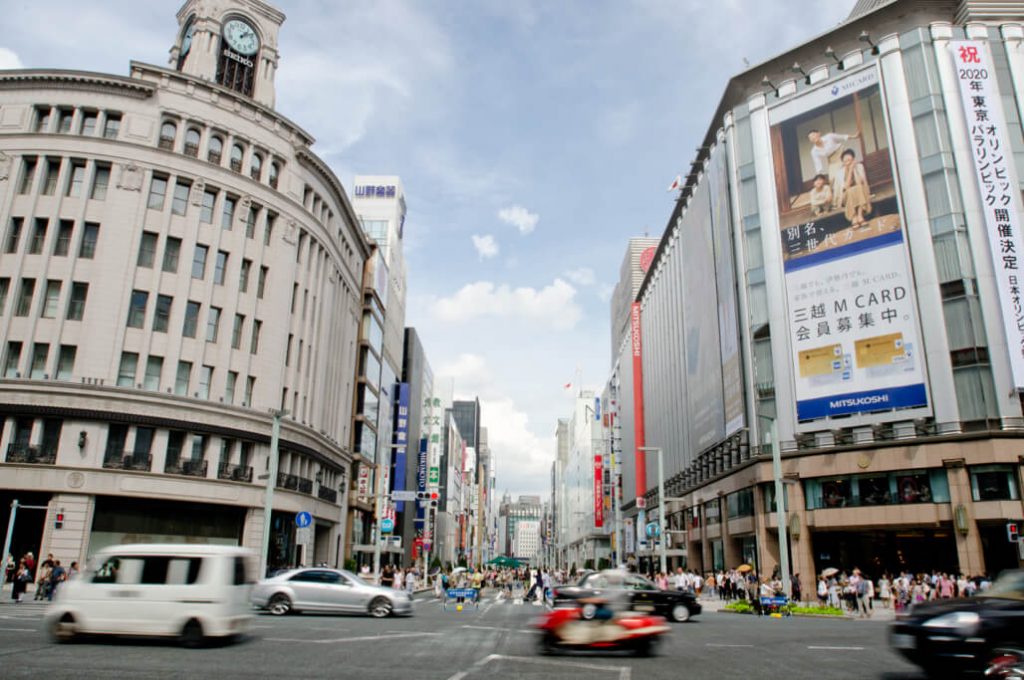 Ginza is a famous upmarket shopping, dining and entertainment district, featuring many department stores, boutiques, art galleries, restaurants and cafes. Especially, near the 4-chome intersection, there are lots of high-end brand shops, which makes it look like Fifth Avenue in New York. 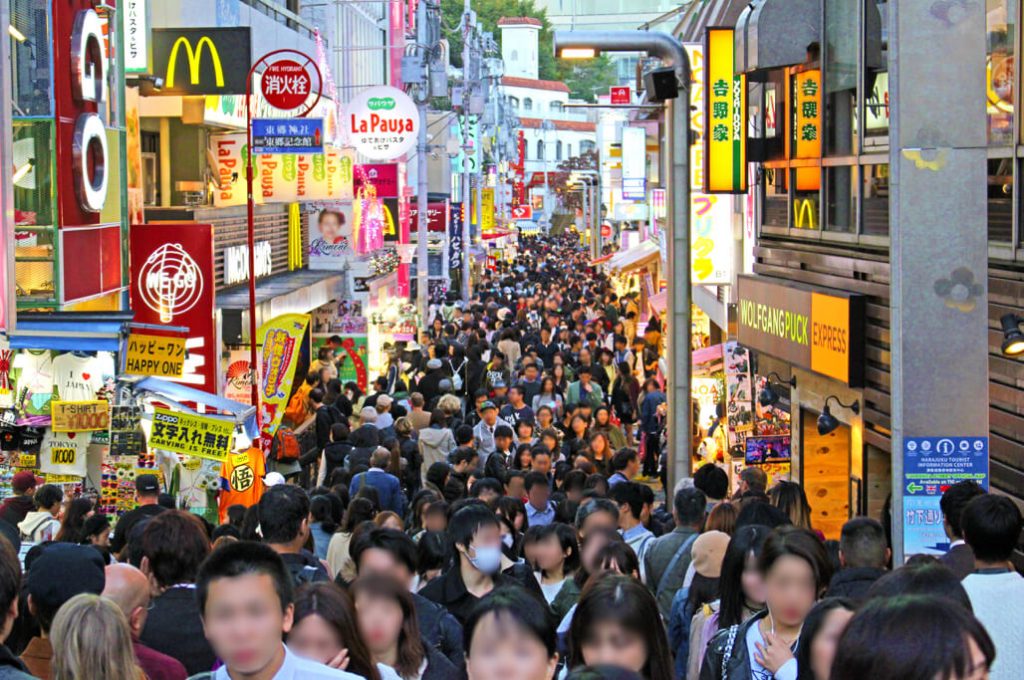 Harajuku is a source of “Kawaii” culture. Takeshita Dori street, Omotesando avenue, and Cat Street are popular among young generation.
Takeshita Dori has many colorful shops and it is crowded every day. Therefore, it is recommended to visit there in the evening after 18:00. It will not be crowded so much! 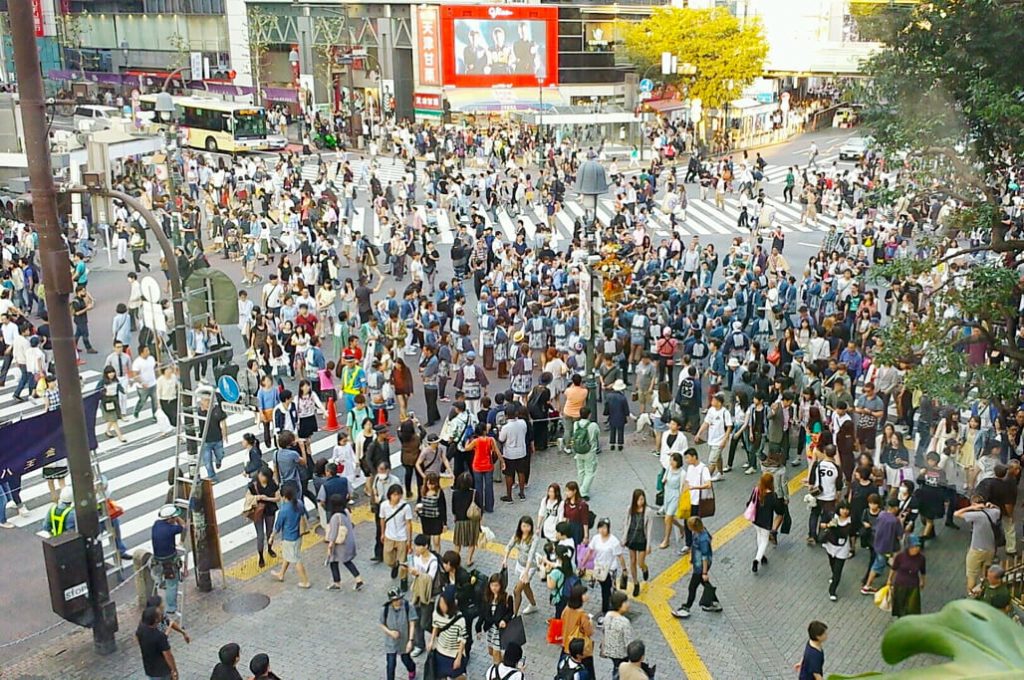 Shibuya crossing is probably the most famous landmark in Tokyo. It is surrounded by towering buildings and huge LED advertising screens. This crossing has become popular among tourists since its appearance in Hollywood movies, “Lost in Translation” and “Tokyo Drift.” Naturally, many tourists take photos at this crossing. It is in front of the exit for the Hachiko (dog) statue at the JR Shibuya station.